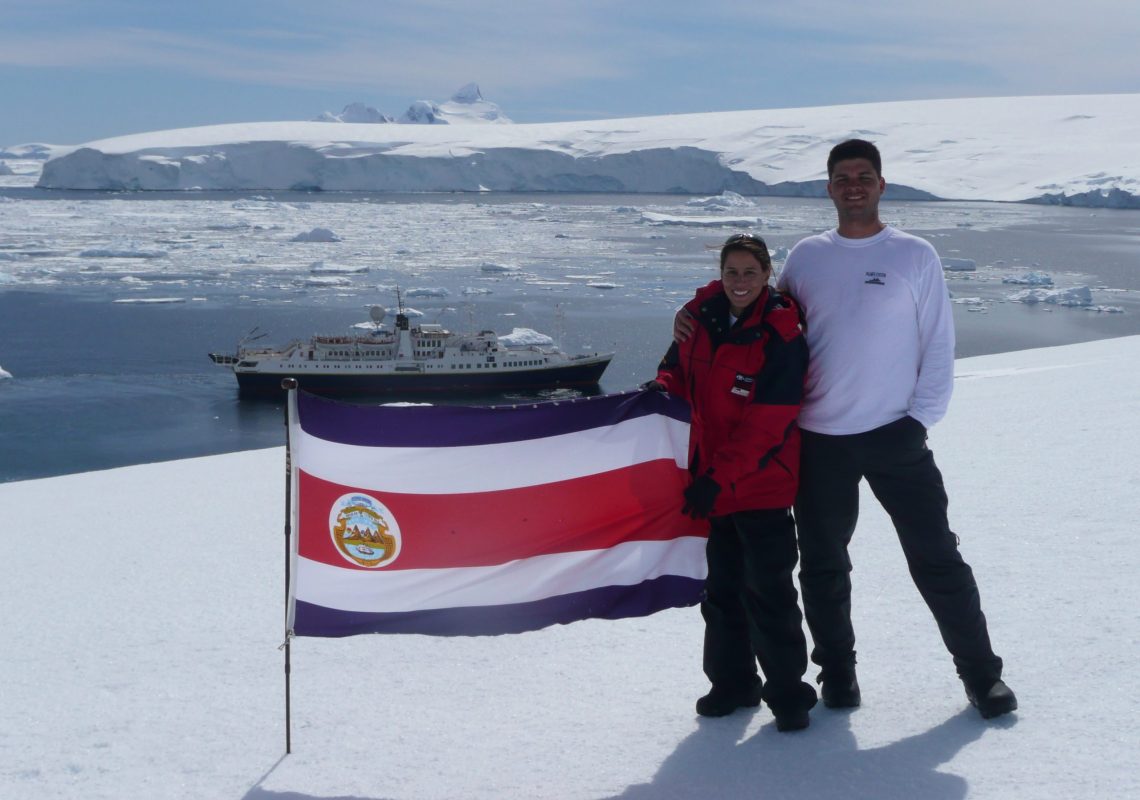 2007 was a magical year for me. I spent most of the year training for the Chicago marathon, was able to accomplish my goal in October, thinking this would allow me to get fit for our wedding. In November, we had a wonderful Thanksgiving with family and friends who flew in from all over the world, and we topped everything off with a beach wedding in Playa Herradura, in Costa Rica.

We could not decide where to go for our honeymoon. Costa Rica has such marvelous beaches, volcanoes, and rainforests, so we wanted to go somewhere completely different. We thought of Japan, but December was not the right month to travel there. I wanted to go somewhere that might be a once in a lifetime experience; somewhere exciting that I would probably not get a chance to visit as a diplomat. So, after much thought, we decided to travel to Antarctica. I didn’t know much about the frozen continent, except for the fact that penguins lived there and that it was often a point of reference when addressing climate change, but I didn’t understand the huge role it plays in the environment, and its enormous diversity of ocean life.

One of the first things I learned was that the continent of Antarctica is divided between New Zealand, Australia, France, Norway, the United Kingdom, Chile and Argentina, and that there is an Antarctic Treaty signed by 47 States that establishes that the region south of 60 degrees latitude remains politically neutral and can be used for research.

As I mentioned before, Antarctica plays an important role in the climate processes of the world. For example, the “polar vortex”, which is a low-pressure area with a strong wind pattern, helps maintain the Earth’s energy balance by reflecting solar rays away from the Earth. The “ocean conveyer belt”, which is a system of water, helps water flow all over the globe.

We started off by flying into Santiago and staying with a high school friend for a couple of nights. We visited the amazing seafood market, where we had a taste of the local fresh seafood. Then we flew to the world’s most southernmost city, Ushuaia, where we visited the fascinating Maritime Museum, which used to be a prison, built by its own inmates.

Finally, we boarded a small explorer vessel and headed towards the great continent. We voyaged across the Drake Passage, enjoying the company of whales and seabirds that glided along the sides of the ship. I learned that the humpback whales migrate around 5000 kilometer every year. They spend their time in Antarctica during the summer months, and in the Fall return to the warmer Pacific areas, including the Costa Rican Dome, which is rich in plankton, in order to mate, birth and nurse their calves.

After two days of travel, we reached the astounding polar landscape of the Antarctic continent. We rode across the spectacular views and enjoyed a few kayaking and zodiac adventures, spotting penguins and seals. Lastly, we visited the abandoned whaling site of Palmer Island, and then reached Deception Island, a caldera of an active volcano where we took a polar plunge.

But what I enjoyed the most was learning about penguins, distinguishing between the King and Emperor penguins, learning about the Adelie, Gentoo and Chinstrap, and watching them walk back and forth with small rocks as they nested.

Thirteen years later, I look back to this experience and realize it was the perfect honeymoon choice. We had just the right balance between relaxing and adventure; and it helped me become a better person, more aware, and more appreciative towards the balance of nature.