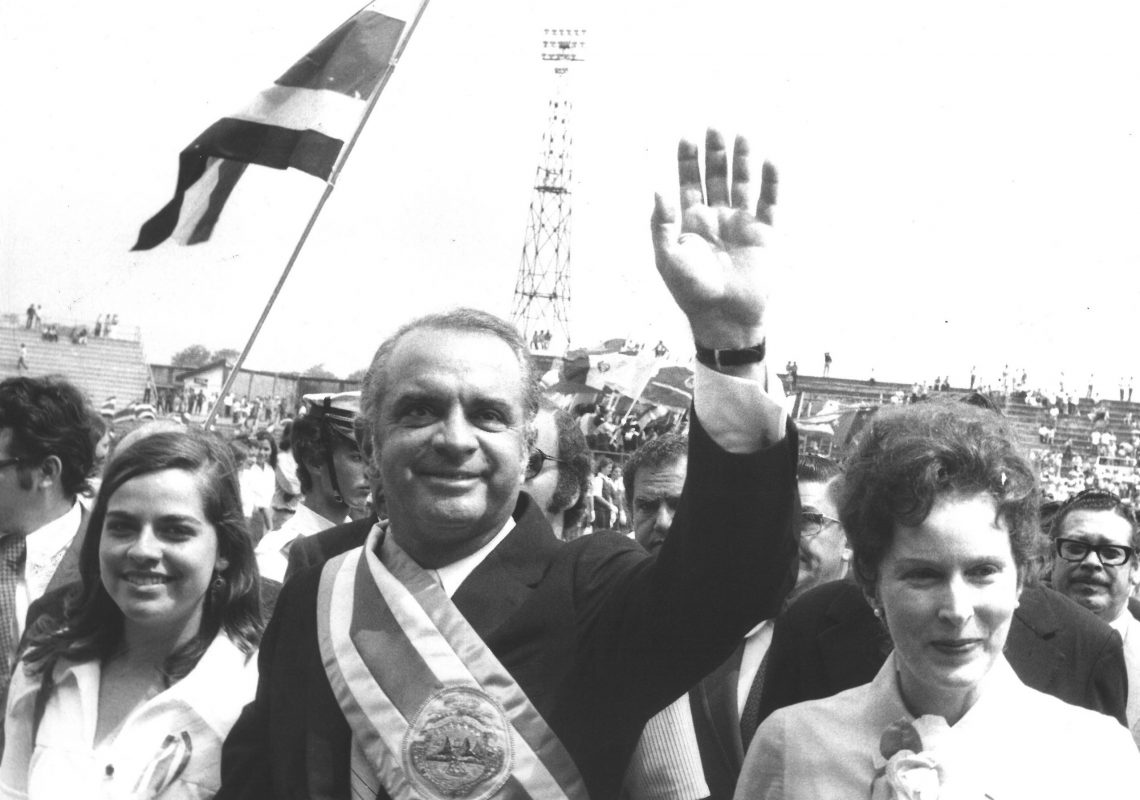 Many remember my father for having been the President of the Republic of Costa Rica from 1974 until 1978, and for his political career, developed through many years from his participation in the Center for the Study of National Problems, as a member of the Founding Board of the Second Republic, as a participant of the Revolution of 1948 (and the abolishment of the army) with José Figueres Ferrer, Luis Alberto Monge and Francisco Orlich, as one of the founding fathers of the National Liberation Party, as a diplomat, as a Congressman for two terms, as President of the Parliament, and as Minister of Foreign Affairs. In addition to his political career, he was also a poet, a basketball player, a tango dancer, a philosopher and a lawyer.

He was so fond of agriculture and livestock that he acquired a farm in Liberia, Guanacaste in many parts throughout his life. “La Flor”, as he named it, was dedicated to experimenting with mangos, avocados, lemons and sugar cane crops, cattle farming, and included a packing plant available for the use of small farmers. My family donated the farm to EARTH University for the development of studies on Agricultural Sciences and Entrepreneurship, along with a scholarship program for low income students. EARTH-La Flor is also developing renewable energy projects.

It has been commented that my father’s legacy surpasses the material work and institutions that he founded or helped create. Throughout my life, I learned about him as the statesman who ruled with personal sacrifice in favor of all the social sectors of his time.

I am going to highlight some of his actions that I consider most important to remember:

In my opinion, his most enduring work was the creation of the National System for Conservation Areas, as well as the inauguration of the first 13 national parks during his tenure in the Parliament and as President of the Republic. These include Corcovado, Tortuguero, Cahuita, Braulio Carrillo and Chirripó. The Conservation Areas today comprise a third of the national territory. For this amazing effort, Senator Hubert Humphrey awarded him the Shweitzer medal in 1976, and Lord Mayor also awarded him the distinction of “Sir” in the United Kingdom.

In the international arena, people comment that my father was a world-class figure. He was Vice President of the Socialist International Party. He had a great friendship with influential personalities in international politics such as Willy Brandt, Omar Torrijos, François Mitterrand, and Carlos Andrés Pérez. Some of his actions in foreign policy were the reestablishment of consular relations with Cuba, the support to Panama in the nationalization of the canal and the initiation of talks on the island of Contadora to resolve the military conflicts in Central America in order to achieve democratization. Henry Kissinger commented that he was the most cultured President in Latin America in his day.

Some of his projects in infrastructure included the reinforcement of the buildings of the National University and the University of Costa Rica, the beginning of the construction of what is today the Daniel Oduber International Airport, projecting the great tourist development of Guanacaste around the Gulf of Papagayo; the construction of the highway from Ciudad Colón to La Sabana, the mapping of the route to Caldera that was finally completed some years ago, and the studies for the construction of a “ring road” around the capital of San José.

Along the side of his Health Minister, Dr. Herman Weinstock, he led an extraordinary effort to inaugurate new health clinics, and on July 25, 1974, during the celebration of the Annexation of Nicoya, he announced that he would take new steps toward achieving universal social insurance. Their three fundamental achievements were: unifying hospital services so that they were all incorporated in the social security system, bringing health services to rural areas where there were no roads, fighting for child malnutrition and offering health services such as deworming and vaccines. One of the programs that made him most proud was the Social Development and Family Allowances Fund, whose law was signed on December 24, 1974, giving way to the school cafeteria program, one of the most successful in Latin America. In addition, given his enormous concern for marginalized citizens, he promoted a vigorous program of cultivation of the “basic Costa Rican diet”: black beans, rice and corn.

The Technological Institute of Costa Rica (ITCR) and the Distance State University (UNED) were also created during his administration, in order for higher education to reach the entire national territory. He also supported with Fernando Volio the opening of the Autonomous University of Central America (UACA).

During his government, the National Radio and Television System (SINART-Channel 13) was inaugurated, with the objective of promoting education and culture in all sectors of the country, especially in marginalized areas. Institutions such as the National Stock Exchange were also founded (as part of the Costa Rican Development Corporation (Codesa), to direct national savings towards productive capitalization and democratize the economy, facilitating citizens’ access to ownership of property assets. production, the National Council of Rectors (Conare), and its executive arm the Office of Higher Education Planning (OPES). It also contributed with the support of Mr. Álvaro Jenkins, in the creation of the Central Azucarera del Tempisque (Catsa) to expand the cultivation of sugar cane and cotton in Guanacaste.

In the cultural sphere, the La Sabana Metropolitan Park and the Costa Rican Art Museum were created, where the international airport of Costa Rica was previously, with the support of the Minister of Culture, Guido Sáenz González.

A beautiful project that came into life again a few years ago is the Santa Ana Conservation Center (CCSA). During his government, my father promoted the acquisition of the area to build the national zoo, and thanks to the support of Rafael Chinchilla Arias, the property of 52 hectares was obtained in two parts: one part was donated by Mr. Loren Ross, and the rest were acquired in 1976. In 1993 the Conservation Center was inaugurated, and today it has become a small “lung” for Santa Ana, and a place to enjoy nature with the family, with an Agricultural Historical Museum, a wide range of flora and fauna, trails and enclosures with farm and wild animals.

Finally, it is worth mentioning that my father took measures in the Central Bank to maintain monetary stability during his government, and he managed to reduce inflation from 40% to 9% and increased monetary reserves and stimulate national production in the industry, agriculture and increase exports.

I was too young to understand politics, and unfortunately, my father suffered a cruel disqualification and persecution by political enemies, who had influence in the public opinion. He suffered privately, becoming ill and accumulating his internal depression until his death on October 13, 1991. My closest experience to this was when I was playing in the street with my neighbors at the age of 12, and some journalists pulled me into a van and asked me for personal details about his life. That same afternoon, one of them entered my father’s office, who kicked him and caused a front-page story, but he did not spread what had happened in order to protect me. It was never publicized that he won numerous lawsuits against the media that accused him, nor that the person who said he had ties to drug trafficking and ties to my father had been acquitted in a trial of less than ten minutes in the courts of the United States. And later, after a perverse act that occurred against him in the framework of the Fortieth Anniversary of National Liberation in San Ramón, he died at home of a heart attack at night. I remember that the sad resemblance of his painful departure was compared to what happened in Hamlet, so much so that Leonardo Perucci dedicated the staging of that play at the National Theater to his memory.

In reference to these circumstances, former President Luis Alberto Monge once said: “like Daniel from the Old Testament, everyone recognizes his extraordinary intelligence. That is when the doubts, criticisms and attacks begin … “

His heart remains in the Municipality of Liberia, in his adored province; and former President José Figueres Ferrer, together with Mayor Johnny Araya, unveiled a few years later the sculpture created by Ólger Villegas, in front of the Metallic Building, where he walked daily during his childhood to attend the Buenaventura Corrales School. His library and his presidential chair were handed over to the State Distance University (UNED), as part of its 40th anniversary.

These are two publications from people who helped pass his benemeritazgo: