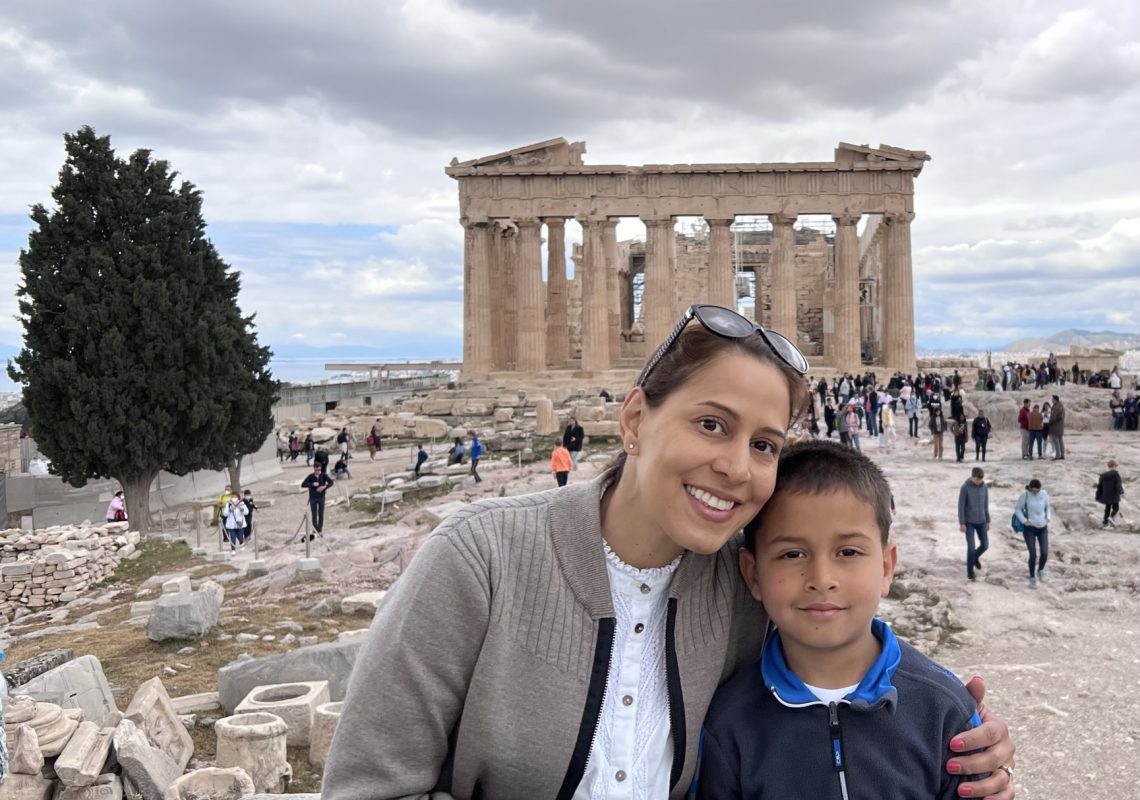 The Magic of Athens and Santorini

When we think of visiting Greece, we picture images of the Parthenon or the beautiful beaches on its many islands. We had an amazing learning and relaxing experience in Athens and Santorini during Easter break. Although a bit chilly at times, we believe this was a great time to visit, since everything was quite cheaper, and we avoided the high season queues.

We flew into Athens and booked two nights in a quaint recently renovated hotel with a rooftop restaurant with views of the Acropolis – The Fresh Hotel – which was next to the Central Market. The area was not the safest in town but very close to everything. Athens was much bigger than we expected, and despite the poverty and large flow of immigrants, everything was very clean and organized.

During our trip, we learned about the main 12 Greek Gods, about the archaeological sites, the life of the Acropolis and itsdestruction. The Acropolis Museum was recently renovated and has amazing artifacts which were found on the rocks of the Acropolis, from the Greek Bronze Age, the Roman Age, and the Byzantine Period. The children were particularly interested in the animal figures portrayed in the sculptures.

We watched the change of the guard ceremony at the Tomb of the Unknown Soldier, a fun experience for the kids, because the soldiers wear shoes with a big pom-pom (tsaoruki shoes) and because they got to feed the pigeons and walk around the Royal Gardens as well. Later, we bought some olive leaf headbands, and then we walked to see the Olympic stadium, which was rebuilt to host the first modern time Olympics in 1896.

Our best culinary experiences were having Greek coffee and ice cream in the Grand Hotel and having a pita gyro withtzatziki sauce and fries in a local market shop.

Santorini was only a 40-minute flight away, and we relaxed in Cape 9 Villas for 4 nights. We rented a Toyota Yaris for 40 euros a day and visited the cities of Oia and Thiros and walked along the many small cobblestone streets and mini markets. We also visited the Atlantis Museum, where we learned about Minoan history and the volcanic eruption, we experienced donkey ride, a sunset tour on a Catamaran and had dinner twice in Topsaraki restaurant by the marina, where we had very fresh grouper, sun dried octopus, local wines (spectacular) and homemade tomato sauce, and the Greek anise-flavoured aperitif Ouzo.  Experiencing the Easter lights in Pyrgos and fireworks with Olivia’s friend Elizabeth’s family, who happened to be there as well, was amazing too!

The cherry on top of our trip was meeting Quino Colom, a basketball player from the Spanish National Team, who let us take a picture of him with Daniel.